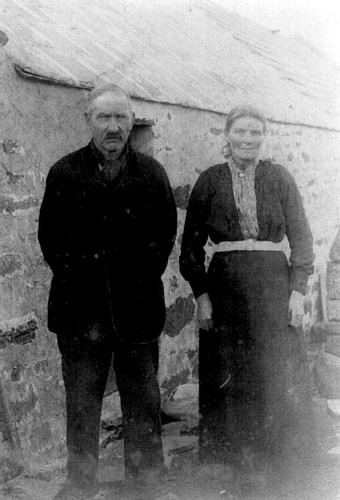 My name is Bruce Norquay; I am the grandson of Gordon Norquay, of Quoyness, Flotta. My grand-father Gordon emigrated to Australia in the early part of the 20th century. The photograph, shown on the left, is of his parents, my great grandparents, James Gunn Norquay and his wife Catherine Isbister.

The photograph was taken outside of a stone cottage which I believe was on Flotta.

Grandfather’s brother, William, was killed in France in 1918 and Grandfather being William’s only next of kin in Australia inherited his house, which became the family home. The property is located in the Sydney suburb of Artarmon.
Gordon Norquay worked for the Adelaide Steam Ship Company, and in 1937 he was fatally injured on board ship and died.He is buried at Port Lincoln, South Australia.

My father, William Thompson Norquay, convalesced on Flotta after being repatriated from a German prisoner of war camp in 1945/46.

He was in a pretty bad state apparently with ulcerated legs due to a wound and continual deprivations he incurred. I am sure his stay on Flotta was planned so he could be nursed back to full health by family members before his return to Australia.

Apart from that I know nothing of the Norquay’s early life on Flotta. Unfortunately all of dad’s generation has passed on. I do know however that they were all very spirited individuals.

I personally believe that we all stand on the shoulders of these great men and women and I would like their stories and lives recorded.

I had the pleasure of meeting Sally, my second cousin, when my wife and I traveled to Orkney in 1984.  She is a really nice person. I was amazed to meet her and her dad, my great uncle Norman, before he passed away. They showed us the family bible which we photographed, which records all births, deaths and marriages of James Gunn Norquay’s extended family.