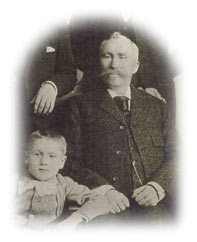 CHARLES HAY, the son of James and Barbara Hay, was born on the Island of Flotta, Orkney Islands, Scotland, on Oct 28th, 1843.  His father was a school teacher there for nearly fifty years. I do not have much information about the family but it seems it consisted of four sons and a daughter.

Father’s ambition, when leaving the Orkney Islands, was to be the best man ever to leave there. At the age of seventeen he signed a contract with the Hudson’s Bay Co. for service in Canada and, after a three month voyage by sailing ship, landed at York Factory on Hudson’s Bay.

Under the terms of the contract he was to be paid fifty dollars per year and was to receive the food the Company provided which consisted of bread, pemmican and white fish. Largely on account of poor working conditions, poor food and the out- breaks of scurvy amongst the men, he told the factor [manager] at York Factory that he was going to leave the service. The factor said he couldn’t as he was under a seven year contract with the Co. but father told him the Co. broke the contract the day he landed in Canada as he had been hired as a sailor and had done no work of that kind.  I do not know exactly how long he was in the H.B.Co. Service but understand it was three years.

After that time he left and went to the Red River Settlements where Manitoba now is. There he engaged in the fur trade with the Indians. This was at the time of the civil war in the United States. The custom was to trade goods with the Indians for the furs which they sold to the H.Bay Co. for gold.  Some unscrupulous traders traded liquor for the furs but father, being a man of high moral character, did not do so.

At that time, on account of the war, the rate of exchange was a hundred per cent in favor of British gold so the fur traders would take the gold to an American town and buy goods.  In traveling, they used Red River carts and it was the custom for quite a few of the men to travel together with strings of carts called brigades. This was not so much for protection against the Indians as against white men, who, knowing they had considerable gold with them might rob and even kill them. As this was before the establishment of the R.N.W.M.P., there was no law in the country.

I do not know how long Father continued in the fur trade. He always had a partner and the one he most often spoke about was named “Sinclair”. Later he lived in Portage La Prairie which at that time consisted of only two or three houses. 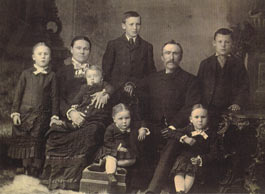 Charles Hay and wife Annie Munro Wild with 6 of their children, circa 1883

On Jan 21st, 1869, he married Annie Munro Wild, who was born in Old Fort Garry where Winnipeg now stands on Feb. 26th, 1854. They had a family of eleven children, ten of whom were born in Portage, while I was born in Vancouver, B.C.

Father was prominent in the early days in Manitoba.  I wrote the Manitoba provincial archivist for information about him but was unable to get much from him. He wrote that father was first elected for the Constituency of Norfolk to the Manitoba Legislature in 1883, that he was a member of the firm of “Campbell, Hay and Boddy”, a justice of the peace, postmaster and on the council of the Municipality of Portage La Prairie.

Submitted by his grandson, David Palmquist.