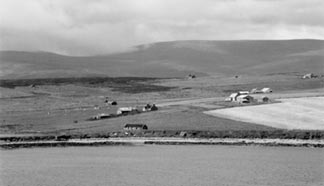 God gives all men all earth to love,
But since man’s heart is small,
Ordains for each one spot shall prove,
Beloved over all.

IN his recent Rectorial Address to the students of Aberdeen University, Sir Arthur Keith said that love of country was a matter springing from the heart, and not from the head. The same holds for the love of home, which is really the basis of patriotism.

Reason says clearly that Flotta can only support a few, yet, while the head urges towards the outer world where fortunes are to be made, the heart never fails to remind that, though other places may he tolerable so far as work is concerned, there is no question as to which is the best spot in the world. Hence the pilgrimages which are just as frequent as means will allow. Homes may be made elsewhere, new circles of friends formed, new interests taken up, yet there is always the delightful anticipation of that return – which may entail a crossing of a continent or two, or an ocean or two. It means perforce the crossing of the Moray Firth, or at least the Pentland Firth, and only those who have experienced either can know what that may mean. But it is worth even that.

Many an anxious look is cast ahead for the first glimpse of the Islands. It is rather misty, and it is trying on the eyes. Land ahead! No, it is only a wreath of fog. No, it is not! The Skerries! And there’s Stroma, and then Swona! Alas, it is changed days! A few years ago we might have passed a yawl with a kent figure hauling on a line with maybe ” himsel’ ” at the other end. But the cod have quite deserted the Firth and “he” is a stranger.
What is that over the port bow? Why … that must be Waas! It is! There’s Cantick … and now there’s Switha … and, at last, … FLOTTA.

Stanger does not seem very high until we come close underneath it. The memories come in a flood!
Wonder if the cuithes still bite, maybe three at a time, when the sun has just set and there is just a slight ripple on the sea? Do the fishers still crawl away from the Waaster Noust, stumbling over the beach with a sack or a creel on their backs after midnight?

Yes! You can see daylight through the Hole o’ Row when halfway to Switha. Wonder what boat was first at Switha going to the sheep-rooin’ this year? There was no kempin’ the day the destroyers went up Switha Sound just as the boats were getting off the land loaded with people and sheep. Nor the day that the thunder storm came on so suddenly. Of course, that storm was not to be compared with the one on the day of the West Hill dipping when the pails were thrown away in case they attracted the lightening. The West Hill! Oh! the days at the berries! There is a place above the Quoy where the water had run the road full of sand. Surely no other sand had quite the same feeling to the bare feet.

King’s Hard, where the King landed to review the troops during the war. The Back o’ the Hill, Quoyness, Pan Bay … will the sea be as warm at the Head o’ the Bay? No boats lying at anchor now. “The Maggie,” “The Lebanon,” “The Dolphin,” “The Glen” –all gone. No more market nights, when they crept in at twilight, and the waiting people on shore could hear the words of a song come floating over the bay. The Roan with its paw! A shiver runs up the spine at the thought of standing on the paw for the first time and looking down on the rocks beneath. Sheer bravado to impress companions, who could do no less in their turn.

“Between the Weeks,” “The Red Face” where the “Anita ran ashore. Flints from her ballast and the back of a knife used to make the sparks fly at school. But there is a new school now. Not the one for whose fireplace peats had to be carried in the morning. To be sure, they made good substitutes for a sled, when the snow was on the ground and the roads covered with ice.

And the days on Gowan’s Brae with the sleds. Better still the moonlight nights when the run went down to Mac’s, and the ring of the runners could be heard for a mile, when not drowned by the shouting and laughter. The exquisite pain of thawing out the fingers and ears, when the fun was over. There was one night in particular. The Merry Dancers filled the sky from horizon to horizon, and the reflection on the snow was red as blood. Some people heard them swishing! I wonder! Was that the snow that smoored the sheep in the shoreface, leaving them at the mercy of the next high-tide which carried them out to sea?

The quiet, still, summer evenings when nothing broke the silence save the harsh yet pleasant note of the
Crake! The storms of wind, when roofs were lifted and the crops washed on the sea. The watching of boats beating up the bay against a gale, and the relief when they made land. The regatta, when some of the boats were in danger through the throwing of ballast in a reckless effort for speed. Not a sail to compare with the projected one round Swona, but nevertheless one which, by reason of the weather, required a thorough knowledge of seamanship.

“The Back o’ Golta,” the ruins of the Y.M.C.A. standing gaunt on the skyline. Beside it was the open-air boxing ring at which were decided the Naval Boxing Championships during the war.
“Scapa Flow!” How changed from war time! Gone the bustle and hurry of the ships, and pinnaces scurrying to and fro. The excitement of that race when a Yawl with four oars was ambitious enough to try conclusions with a Navel cutter – and held the lead for a length or two. The boarding of ships with eggs, and the not infrequent bartering for cigarettes or tobacco. The sinking of the German Fleet and their raising.
Sutherland Pier! Once more on Flotta. The head says, “I had to go.” The heart replies, “Why, did I leave?” The heart triumphs, until the head says that it is time to go – only until next time.

Islanders have love of home to a much greater degree than that by their less fortunate fellow creatures, who have been born and bred inland or in a city. This is due to two factors. Firstly, the life on an island because of its limits approaches more nearly to family life. There are differences, but these are akin to family squabbles. If treated with charity and forebearance, the differences are forgotten, and the wounds soon heal.

Secondly, there is the sea. Those who live by the sea, in both senses of the word by, know its cruelty, but they also know its fascination, and this knowledge is the bond that draws together islanders the world over, so much so on that they are sometimes looked upon as clannish by people who look on the surface.
If they trouble to search underneath they find that what is sometimes even apparently boorishness is a reserve natural to those bred by the sea and masking an astonishing depth of feeling. This reserve is more easily pierced by those, who have a similar quality, hence the clannishness of islanders.

Out of this love of the islands, more especially Flotta, was born the idea of a publication about Flotta for people connected with Flotta “The Flottarian.” If it revives pleasant memories, if it brings back in spirit one single exile who is unable to return in body, it will have accomplished all that it has set out to do.