From The Orkneys and Shetland; Their Past and Present State by John R. Tudor. Published 1883. Chapter xxvi, The Orkneys – South Isles, pages 333-334. 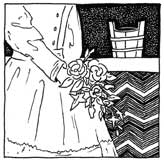 Flotta for a long time was entirely dependent on the mother parish, Walls for spiritual ministrations; and though the minister was supposed to hold service there every third Sunday, owing to weather, the Flotteyans were often for weeks without a pastor. Under these circumstances, if a couple were in a hurry to be married, the bridegroom, accompanied by his best man, proceeded to the session clerk on the Saturday night, the day when the engagements were generally made, to give directions for the proclamation of the banns. On the following day (Sunday) the clerk, sexton, and a friend proceeded to the kirk, where the clerk gave out the banns, a ceremony which was repeated, as elsewhere, on the two following Sundays. The wedding seems generally to have taken place on a Thursday, and at the wedding-feast a sort of loving-cup was handed round called “the bride’s cog,” or ” leem.”

The cog was a sort of diminutive washing-tub with two handles, and held about four English quarts. The “marriage drink” consisted of ale and whisky mixed. What heads the company must have had next day if the cog circulated freely, it is something awful to contemplate ! The following day (Friday) known as “ranting day,” after more eating and drinking, the company assembled at the kirk, when some one having been elected minister for the nonce, he proceeded to read a portion of Scripture and sing a verse or two of a psalm. This ceremony was considered to have a retrospective effect, and without it, the bride was looked upon as “unclean.” If, before she was “kirkit,” the bride had visited the houses of any of her neighbours she was considered to have defiled them, and rendered them liable to be overrun with moths. When the olive branches came, the mother on recovery, had to attend with her cummers and the “wise-woman,” or mid-wife, at the kirk, where the “skilly-wife ” read a verse of a psalm, and pronounced the quondam patient “clean.”

There is no service in the Scottish Church analogous to that in the Church of England for the churching of women after childbirth, and as far as the writer can make out, never has been since the Reformation. This last custom, therefore, must have survived from Roman Catholic times.